skip to main | skip to sidebar

Tempted to do something you can't afford?

Sometimes it is hard to say No to a fun event just because it's not in your budget. I love to bicycle and ten of my fellow cyclists are flying to Paris and then bicycling in France for a week. It sounded so wonderful, I immediately signed on.

But then...the cost of the trip began to go up. Air fare, the euro-dollar exchange rate, hotels in Paris...pretty soon it the cost was $1200 more than originally quoted. Part of me said, "Do it anyway! This chance won't come again!" Another part of me said, "You'll be broke afterward. It will take all your cushion."

So here's what I decided: I turned down the trip to France AND immediately signed up instead for a week-long bicycle ride in Wisconsin with some other bike buddies. The cost is one-tenth of the European trip

Okay, so I won't have Paris...but I'll always have Milwaukee. And Milwaukee is a lovely city with an outstanding art museum

Point being: If we stay flexible in our thinking, we can find ways to enjoy ourselves...and do it in an affordable way. There is always more than one answer. Instead of whining about what can't be done, follow my lead. Figure out what you can do.
Posted by Barbara Bartocci at 8:42 PM 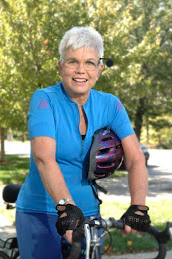 It doesn't cost a lot to bicycle

Barbara Bartocci
Overland Park, KS, United States
In my twenties, I was happily married to a Navy fighter pilot; a stay-at-home mom of three small children. When John’s plane went down, my life--and my children’s lives–changed forever. Widowed at 29, I went back to college, earned an M.A. in Creative Writing, and moved my little family from San Diego to Kansas City to work for Hallmark. Frankly, those were difficult years. But even in dark moments, I discovered that God provides grace. I began writing and speaking about how to stay faith-filled in the face of life-altering change. I have experienced death of loved ones, divorce, children’s special needs, losing a job, providing care to older parents, and a serious personal illness (which, thankfully, healed) so I feel a deep empathy for others’ life transitions. Yet I have had as many joys as sorrows. One is long-distance bicycling. Another is grandchildren. What a thrill when my grandson Jake wrote an essay for his sixth grade class and titled it, “My seminar-giving, spiritual-writing, bicycle-riding, super-Grammy." Now Who could ask for a better endorsement than that?